The true origins of Santa Claus

by Kirsten Spiteri - December 22, 2018
Have you ever wondered from where and how the legend of Santa Claus and his eight flying reindeers came to be? There are many legends throughout history that celebrate a benevolent being that travelled by night bearing gifts for those in need, and this is the story of one of those legends that became part of the Santa Claus we celebrate today.
The story begins in the northern regions of Europe. Long before Christianity spread throughout the world, pagan rituals and customs were prevalent throughout the lands, and there was the supreme Odin whose arrival was long awaited by the inhabitants of early Germanic Tribes and Scandinavia. Odin was the father of all the gods and ruler of Asgard in Norse Mythology, and was depicted as a tall, old man with a white beard and almost always wearing a red cloak. He rode the skies and the seas on his fast white eight-legged horse whilst carrying his never missing spear in his hand, and accompanied by his two black ravens which kept him informed about news in the world. 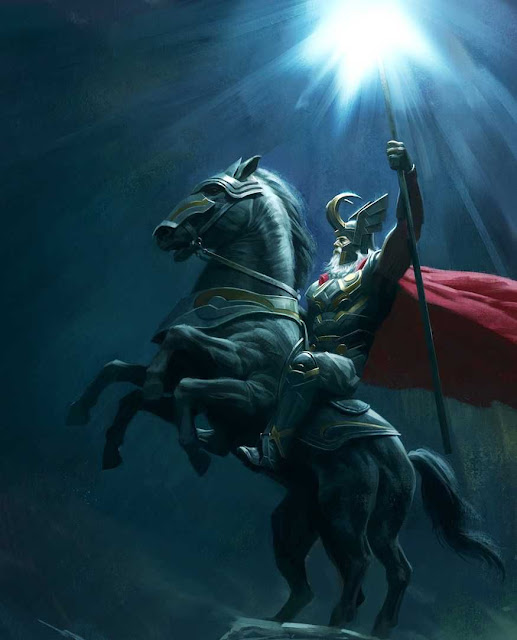 According to Viking traditions, the Germanic Tribes and Scandinavians celebrated Yule, a pagan religious festival beginning on 25 December to early January (12-day period) announcing the arrival of the winter solstice. Yule had many traditions attached to it that we associate with Christmas today, including carolling and decorating evergreen trees. During this time, many believed that Odin, disguised in a long red-hooded cloak, would travel to Earth from Asgard on his eight-legged horse bringing gifts of bread for those in need. As traditions grew over time, the children of these lands would anticipate the arrival of Odin by filling their boots with straw, carrots and sugar and place them near the fireplace so that his eight-legged horse could come down to eat during his night rides. Odin would then reward these kind children by replacing food with gifts and candy inside the boots. By now, you can see that many of those traditions survived even though they were subject to slight changes: the eight-legged horse became eight reindeers; the boots by the fireplaces would eventually become stockings hung by the chimney; and the food and candy became toys. It was following the advent of Christianity that Odin’s gift-giving practice became associated with a Christian saint, which is the next character that is going to be discussed in this article.
Time goes by and Christianity develops itself. In the 4th century, in Myra (part of modern-day Turkey), a Christian bishop named Nicholas lived with great reputation for goodness, benevolence and performing miracles for the poor and unhappy. It is not difficult to understand that during the poverty of the Middle Ages this bishop became extremely popular as Saint Nicholas in all parts of Europe. His feast day is his birthday, 5 December. After the Protestant Reformation, Saint Nicholas became forgotten in all the protestant countries of Europe except The Netherlands. It is in The Netherlands that Sinterklaas was created by amalgamating the legend of Saint Nicholas and the myth of Odin. However, in my modest opinion, Sinterklaas looks much more like Odin due to the similarities between the two figures. Sinterklaas was described as an old man with a white beard, white dress and red cloak. He held a crosier in his hand (instead of the spear) and rode skies and roofs of the houses on his white horse (instead of the eight-legged horse) accompanied by his informers with black faces called the Black Jacks (instead of the ravens). Sinterklaas visits you on his birthday, 5 December, to donate gifts. His Black Jacks have informed him about your behaviour. If you were good you will be rewarded with presents, but if you were bad you will be punished by the Black Jacks who will beat you with their rods, put you in a big bag and take you with them to Spain, said to be the residence of Sinterklaas. This sounds to be a Christian influence, to be punished severely if you don’t behave morally just. On the other hand, if you behave nice you will be rewarded with sweets and gifts.
In the 17th century some Dutch settled in North America, founded New Amsterdam (modern-day New York) and brought their tradition of Sinterklaas with them. In the new English-speaking world the name morphed into Santa Claus. In 1930 a designer for the Coca-Cola Company was asked to draw attractive advertisements for this drink that did not sell well in wintertime. He had to use the company colours (red and white) and create something. He remembered the Dutch Santa Claus with his white dress, red cloak and long white beard. The horse was replaced with eight flying reindeers. The punishing Black Jacks were inappropriate in this concept so they were removed. This new Santa Claus became a big hit and his popularity placed him in competition against Sinterklaas in Europe.
My conclusion is that Santa Claus and Saint Nicholas are not synonyms as many of us believe. What about you?

This article was originally published on The Malta Independent on 22/12/2013.

Adorable new book: Where am I from?

by Kirsten Spiteri - July 25, 2018
When I first heard about this new book by Elisavet Arkolaki, it immediately intrigued me, as the title reminded me about one of my favourite paintings by French post-Impressionist artist, Paul Gauguin. The painting I’m referring to is; Where Do We Come From? What Are We? Where Are We Going? Elisavet Arkolaki is a mother, a professional writer, and also runs www.maltamum.com which is the top parenting blog in Malta. Where am I from?  is a new children's book featuring 12 illustrations-murals, 1 mural for the book cover, and a wonderful message. To put it simply, it wants to bring a message of peace & unity while teaching children about different countries, and the beauty of street art & graffiti. In fact, the artist will paint on walls, and then proceed with taking high resolution pictures with a professional camera. The murals will be painted in Athens by Platon, a most well-known street artist in Greece, and his pictures will accompany the story. Thi
Post a Comment
Read more

by Kirsten Spiteri - April 22, 2018
Why are women’s nipples, specifically, so taboo? Why are people so shocked by women’s nipples? Why do they have so much power? Men have them. Women have them. We all demand equality and want to be treated equally, yet women are still vilified for 'indecent exposure' for showing something that both parties naturally have. Why only women? As if the public is simply too delicate to handle seeing female nipples. When did a nipple become offensive? Where do you draw the line at 'indecent'? What is it about women’s nipples that can stir so much interest in today’s society? They are, after all, a normal part of all women regardless of race, ethnicity or religion. I’m trying my best to understand why society looks upon women’s nipples as offensive. I understand the whole religious morality issue – even though, as an Atheist, I don’t agree with it. Women were taught since early childhood that displaying their nipples openly is offensive, slutty, and completely
Post a Comment
Read more